Dating as far back as 700 B.C. and the Grecian Olympic Games, horse racing is one of the oldest sports in the world. Today, U.S. horse racing has evolved into a modern, sophisticated competition between thoroughbreds and the jockeys who ride them.

But which have been the winning horses in the last 120 years, and how fast did they have to be to cross the finish line first in the most prestigious races? We decided to examine the average speed of the winning horses that competed in the Kentucky Derby, Preakness Stakes, and Belmont Stakes – and those that ultimately won the Triple Crown. Curious to see which thoroughbreds stand out in history? Keep reading.

Here we have the Triple Crown winners over the last 96 years as if they were competing against one another.

A BRIEF HISTORY OF THE TRIPLE CROWN

Every year, three races culminate in the ultimate championship of derby racing in the U.S. – the Triple Crown. Starting with the Kentucky Derby on the first Saturday each May and ending at Belmont Park in June, these races have given us champion horses like Secretariat and American Pharoah.

A $39 billion industry famous across the world, the Belmont Stakes was established in 1867. It wasn’t until 1930, though, that “Triple Crown” was used when Sir Barton became the first horse to win all three races consecutively. Since then, 11 horses have been crowned with the illustrious title, and millions have cheered them on.

THE KENTUCKY DERBY OVER THE YEARS 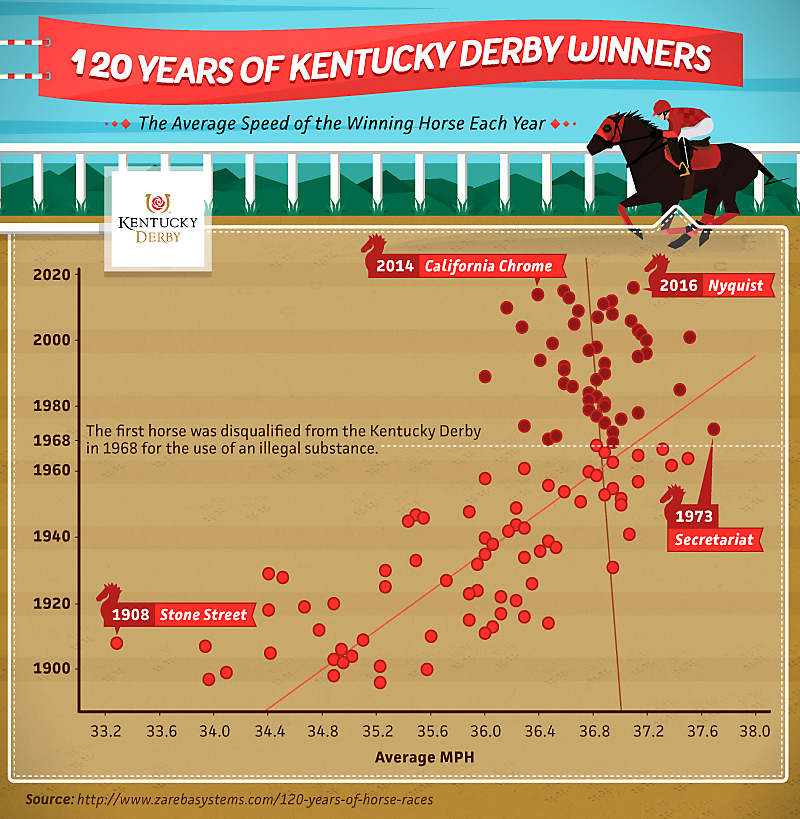 Often referred to as “the most exciting two minutes in sports,” the Kentucky Derby is the longest continually held sporting event in the U.S. – and only takes 20 horses two minutes to make it one and one-quarter of a mile.

The Kentucky Derby was established in 1875 when Meriwether Lewis Clark traveled to Europe to see the Epsom Derby in England. Inspired by the sport and with the help of his family, Clark built a permanent track known today as Churchill Downs – home of the Kentucky Derby. Known perhaps as much for its horses as for its flamboyant hats and mint juleps, the Kentucky Derby is the first race on the path to infinite stardom for some horses and the people who ride them.

In 1908, Stone Street was the first horse to break 33 mph at the Kentucky Derby. While speeds throughout the years have increased, following the discovery of the first use of what were originally considered illegal substances to enhance the performance of horses in 1968, derby speeds have stabilized over the last 50 years, and no horse has yet to break 38 mph. While the famous Secretariat established the current average speed record of faster than 37.7 mph in 1973, horses at the Kentucky Derby have stayed at roughly around the same speeds over the last 50 years.

Take a look at our animated graphic for an idea of what the fastest racehorses from each decade would have looked like racing against one another at the Kentucky Derby.

THE PREAKNESS STAKES’ PLACE IN HISTORY 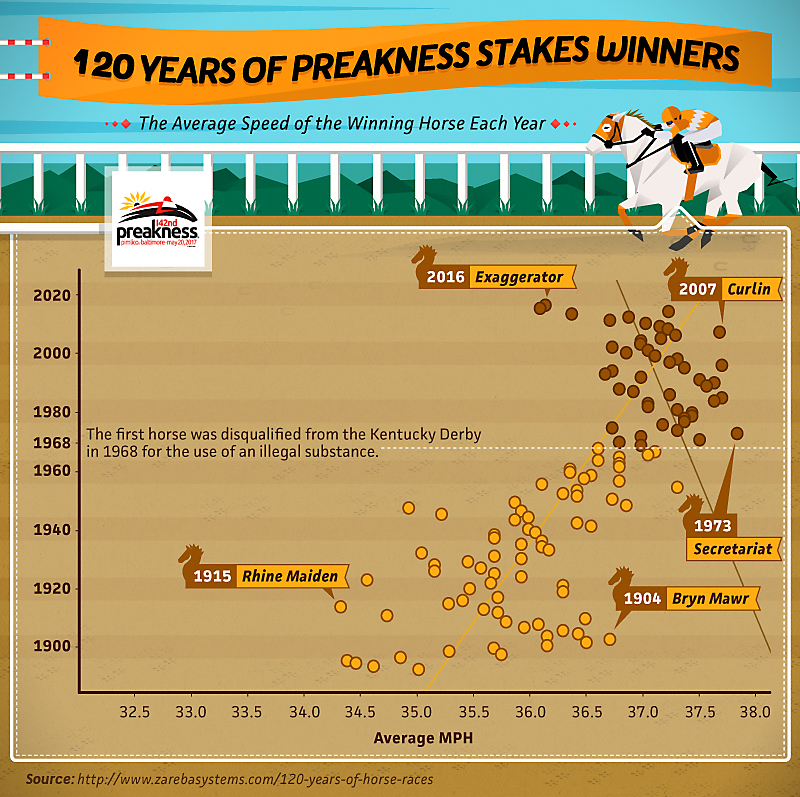 The second oldest racetrack in the U.S. – the Pimlico Race Course, which hosts the Preakness Stakes each year in Baltimore, Maryland – was founded in 1870. What began as a friendly wager over dinner between Maryland’s then-governor and his party guests for the stakes of purchasing the next meal evolved into one of the foremost horse racing tracks in the U.S. and an integral part of racing tradition in America.

Speeds at the Preakness Stakes have historically been faster than those at the Kentucky Derby or the Belmont Stakes, and like these prominent races, legendary Secretariat continues to hold the title for completion at an average speed over 37.8 mph.

Like the Kentucky Derby, speeds at the Preakness have stabilized since the first disqualification for onetime illegal substances in 1968. American Pharoah – the last horse to win the Triple Crown in 2015 – won the Preakness by five and a half lengths.

While destined to remain sheer fantasy, here is a simulation of the fastest Preakness Stakes’ horses from each decade racing against one another.

THE FINAL STRETCH AT BELMONT STAKES 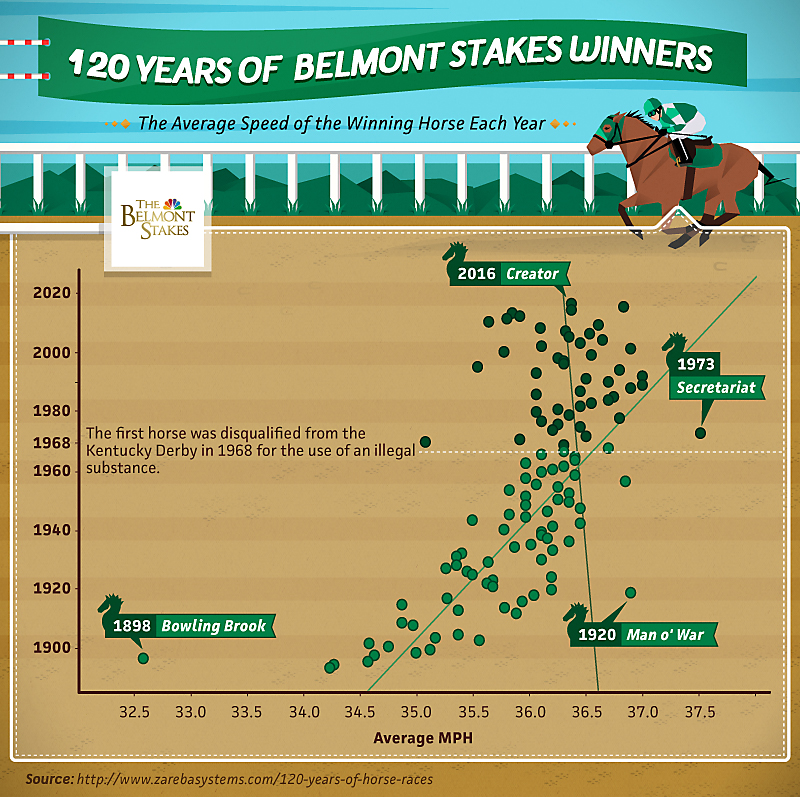 For horses and their owners looking to take home the title and prestige of the Triple Crown, the Belmont Stakes is the make-or-break race.

The Belmont Stakes isn’t just known for being the last leg of the Triple Crown tour; it’s also known for being the most demanding. While the grounds are believed to be nearly 200 years old, Belmont is the oldest of the three races, having celebrated its first run in 1867. Full of history and tradition, the blanket laid over the winning horse at the end of each race is comprised of white carnations – a symbol of luck and love – and weighs 40 pounds. The August Belmont Memorial Cup, crafted by Tiffany & Co., was first awarded in 1926 and showcases the 1869 winner, Fenian, at the top of the cup’s cover.

Speeds at the Belmont Stakes are also slower than at the Kentucky Derby. While Secretariat holds the average speed record here as well, Man o’ War in 1920 finished at a faster pace than Creator in 2016 or American Pharoah in 2015.

For many of the horses at the Belmont Stakes, this race is their last stop to glory. Here we can imagine the fastest horses from each decade as they might have competed against one another.

THE GREATEST VICTORIES OVER TIME 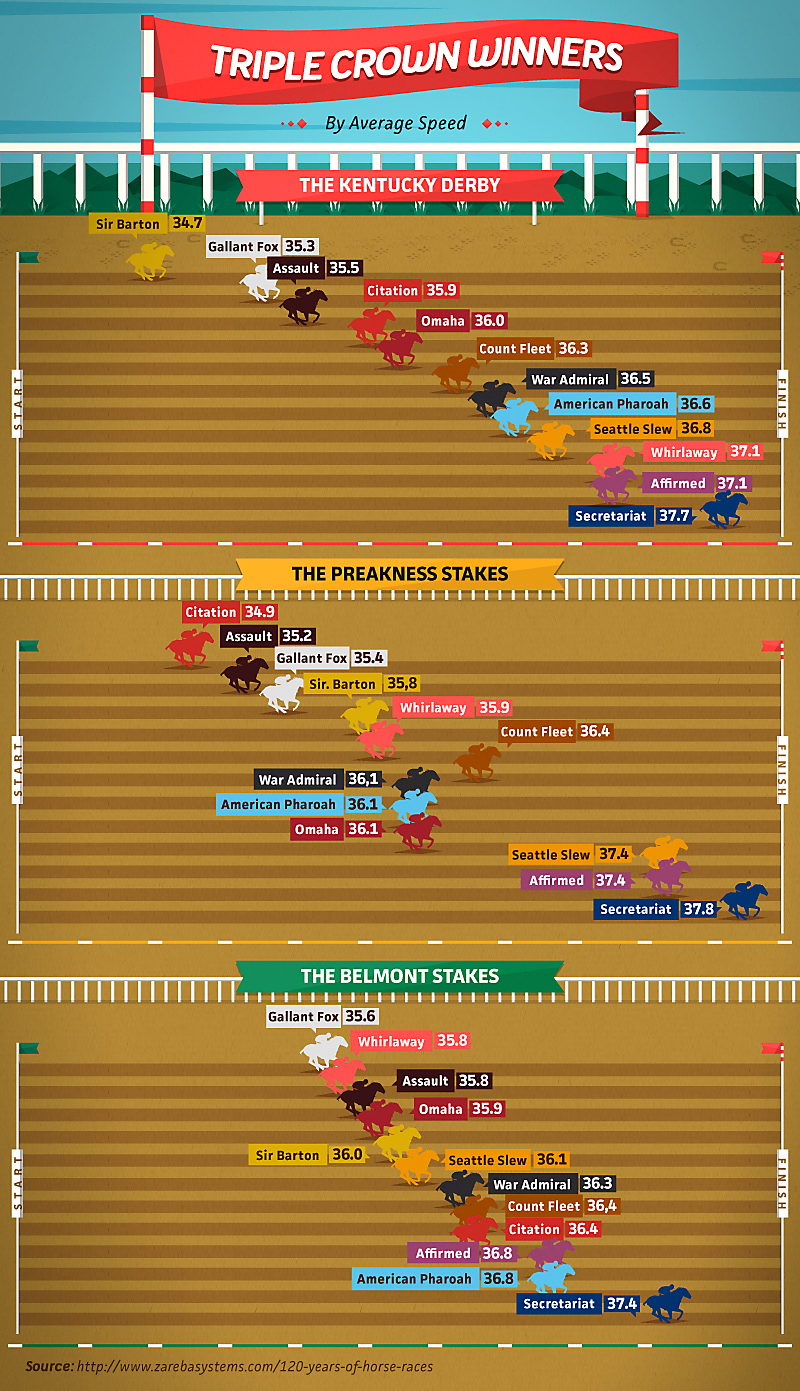 Before Secretariat, a horse hadn’t won the Triple Crown in 25 years. After this historic victory, Seattle Slew won in 1977, and Affirmed followed in his hooves in 1978. Affirmed – also 3 years old at the time of his Triple Crown win – went on to be one of the most successful racehorses even after earning the title.

It took another 37 years for the next Triple Crown winner to emerge. In 2015, American Pharoah won all three races, completing the Belmont Stakes in near-record time. American Pharoah’s speeds at the Kentucky Derby and Preakness were average compared to other Triple Crown winners, but he was the second fastest horse to finish the Belmont and win the Crown – trailing only behind Secretariat.

CLOSE, BUT NO CIGAR 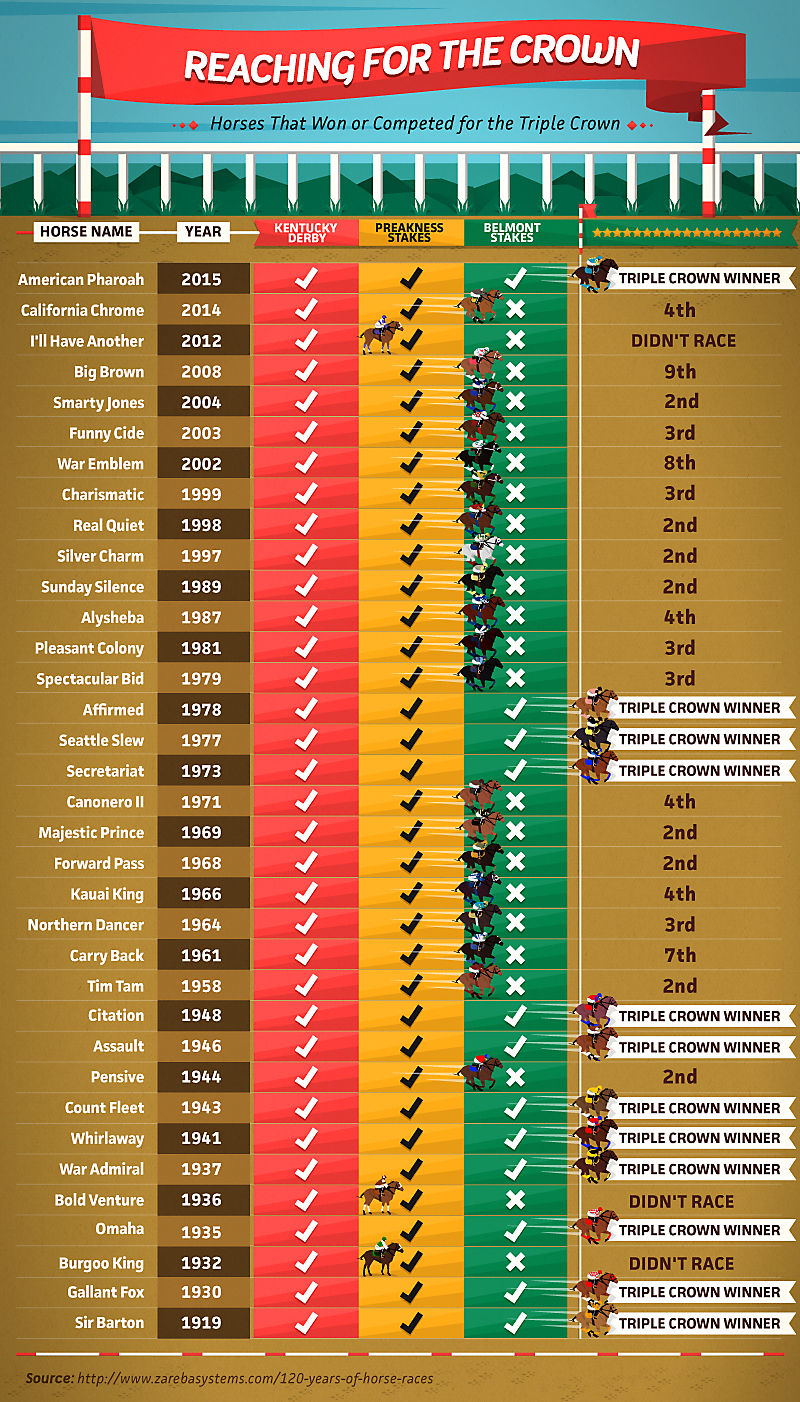 Only 12 horses have ever had the distinction of being named Triple Crown winners – but much more have come close or didn’t make it to the final race at the Belmont Stakes.

American Pharoah won it all in 2015, but in 2014, California Chrome came close. After winning the Kentucky Derby and the Preakness, he placed fourth overall at the Belmont Stakes, missing his chance at fame by mere seconds.

In 2004, Smarty Jones won the Kentucky Derby and the Preakness but only managed to come in second place at the Belmont – a fate similar to that of Real Quiet in 1998, Silver Charm in 1997, and Sunday Silence in 1989. While only a dozen horses have had what it takes to win all three races, 23 horses over the last 87 years of the sport have won the first two races and faltered at the Belmont.

THE FUTURE OF THE RACES

Thoroughbred horse racing has been called the “sport of kings,” and history will never forget Secretariat or American Pharoah – horses that made a permanent mark in the annals of sport’s history.

While derby racing may be in slight decline throughout the U.S. – with talks of illegal enhancements and lacking media coverage – those things don’t matter when the first Saturday in May hits. The history of horse racing across the country is undeniable, even if the future is uncertain. For now, we just enjoy the races.

For this project, we tracked down the times of each winning horse that competed in the Kentucky Derby, Preakness Stakes, and the Belmont Stakes. In addition, we looked at the horses that won the Triple Crown.

Since the 1900s, the length of these races has changed a few times. To account for this, we decided to calculate the average speed of the winning horses in each race.

Linear Trend Lines: On each static asset, you will see a series of trend lines. P-Value can be used to calculate statistical significance.

These trend lines grouped before and after the first horse was disqualified for the use of steroids in 1968.

The Animated GIFs: For the GIF assets, we averaged the MPH of all the horses per decade to have a more global view of race times per decade.

Feel free to share this information about these popular horse races with your readers. When referencing this project, please provide your readers with a link back to this page.