Coyotes are likely the most prevalent and successful carnivores in North America. Unlike their cousins, wolves, which are located only in certain pockets of the country, coyote populations are widespread across much of the nation.

While some livestock managers are lucky enough to have few, if any, coyote encounters, others deal with serious depredation issues from these wily creatures. A simple solution for managing livestock under the threat of coyotes does not exist. However, a combination of preventative and responsive strategies can be effective.

Coyotes are well known for their predatory attacks on livestock. Despite their small size, coyotes actively hunt adult sheep and goats.  In fact, they cause the majority of sheep, goat and cattle predator losses in North America. When working a cattle herd, calves are almost always targeted.

Probably most surprising is that coyotes are also known to damage crops! For example, they are known to consume watermelon.

With so many food targets available, it’s understandable that coyotes clash so often with people. As a result, coyote culling was not uncommon until a few decades ago. As more and more environmental and wildlife protection laws were adopted, deterrent methods have been increasingly developed. 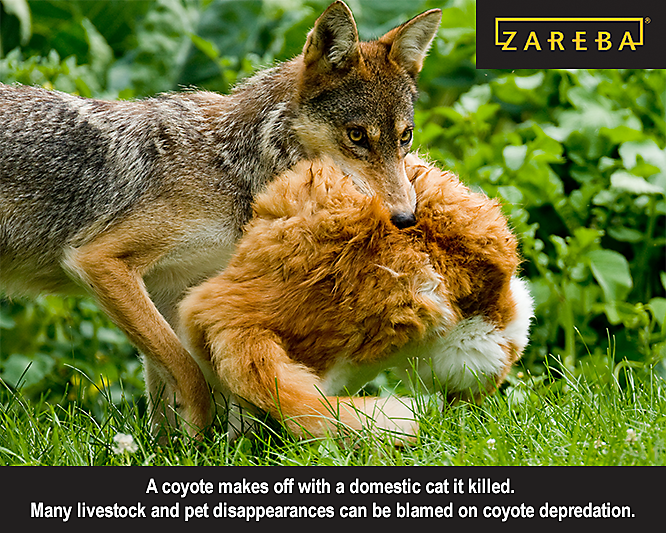 A good place to start your campaign against coyotes is by examining your fencing system. Both permanent and temporary fencing options to exclude predators exist, and some more effective than others.

When it comes to permanent fencing, electrified high-tensile line has been found to provide the most effective protection from predators. For this system to work optimally, a low impedance fence charger capable of maintaining 4,000 to 5,000 volts on the fence line is recommended.

To properly fence against coyotes, a variety of wire counts and wire spacing can be used, including:

It’s important to note that coyotes will also dig to reach their prey, so the lowest electric wire should be placed no more than 6 inches from the ground. 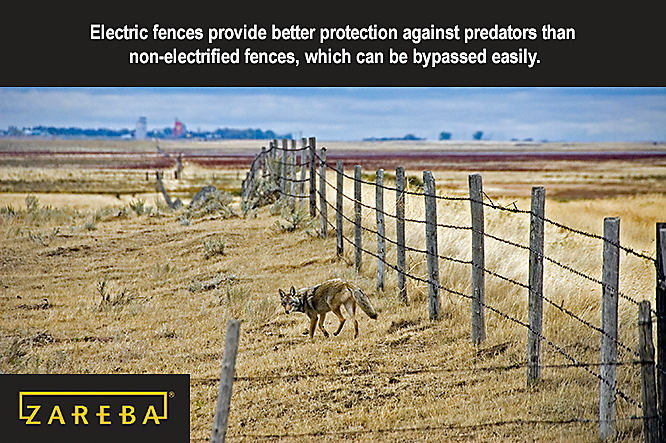 In situations where permanent fencing is not an option or animals are being moved frequently (such as in rotational grazing), fladry can be used. What is fladry? It’s a psychological perimeter barrier created by red flags hanging on a fence line. The flags flap, flutter and twist in the wind just enough to make skittish canids nervous – all that activity keeps them from crossing the perimeter line.

In studies with wolves, livestock producers in western states using this simple fencing method have been able to deter wolves for up to 60 days. In limited testing, researchers have found that electrified fladry can be even more successful than that.  While most fladry studies measure the reactions of wolves, it is assumed that fladry is also effective against coyotes .

Livestock mangers should understand that fladry is only a short-term deterrent. In addition to that, fladry presents its own problems. Deploying this fencing option is labor intensive.  Tangling, general availability and high installation costs are additional limiting factors to this temporary fencing option.

Since no deterrent has proven 100 percent effective at keeping coyotes away from livestock, experts suggest a multi-pronged approach: Set up an electric fence and then add extra measures. Be sure to keep these predators skittish by switching up these less permanent deterrents on a regular basis.

KEEPING COYOTES AWAY FROM LIVESTOCK

Like all preventive predator management methods, these fencing options will only work as well as they are managed and maintained. Regular repair and maintenance of electric fencing will help to ensure fences continue to work properly. Producers should compare the economic loss to predation against the cost of the fence, expected life of the fence, and relative effectiveness of the design chosen when determining what fencing system will work best for their situation.

If you have any additional ideas for keeping coyotes away from the livestock in your pastureland, let us know in the comments below or when you visit Zareba® on Facebook.  Zareba® also offers more information on fencing against coyotes and wolves in its Learning Center.
For more advice on electric fencing, as well as great deals on our electric fencing products, subscribe to the Zareba® E-Newsletter.
Looking for more ways to keep your animals safe and happy? Zareba® has answers: